Is The Domi Wand Really Worth Buying?

Table of Contents
How Does It Work?
Design & Build Quality
How Does It Feel?
Where I Bought Mine
Final Thoughts

I’ll be frank ladies, sometimes wish I could control my ability to orgasm via magic powers. Instead, I have to settle for magic wands.

Wand style vibrators have always been a classic in my repertoire of sex toys (more like a war chest at this point) and I welcome anyone who thinks they can reinvent the wheel as far as vibrators are concerned.

The Domi by Lovense took me by storm the very night I opened it up and turned it on. It’s smaller than most wand style vibrators, more powerful, and sturdier.

More of a personal comment, but I also really like the way this thing looks, a lot of wand style vibrators look like a General Electric mixer from the ‘80s and the Domi has this “what’s that thing?” kind of vibe to it.

I had high hopes for the Domi since I've had great experiences with both the Lush and the Nora, so I assumed the Domi would be no different. Not only that, the remote controlled aspects of Lovense toys really appeal to me.

I am happy to report that the Domi definitely lived up to my expectations, like any good sex toy should.

Now lets get into my full review...

The Domi by Lovense can be connected to the Lovense app, and then the Bluetooth functionality available in most phones connects the phone to the device itself as it is Bluetooth enabled. Once connected, the app can be used to fine-tune the speed and intensity of the vibrations produced by the Domi. My favorite feature is definitely the ability to sync up the vibrations to music, I've used it for both seriously sensual sessions and had Coming In The Air Tonight on once just to be cheeky. The Lovense app will let you connect to your Spotify playlist, otherwise you'll have to deal with what you have downloaded and ready to go.

The owner of the device is not the only person limited to controlling it. Any other phone with the app installed that has been granted permission via the app can control the Domi so long as an internet connection is maintained on all phones. This leads me to talk about a really cute feature on the Domi I feel is worth bringing up. As Don leaves frequently for business trips, we like using these internet-enabled toys so we can feel connected and share some intimacy even when geography isn't in our favor.

Here's a short video that outlines all of the Domi's features and how it works: 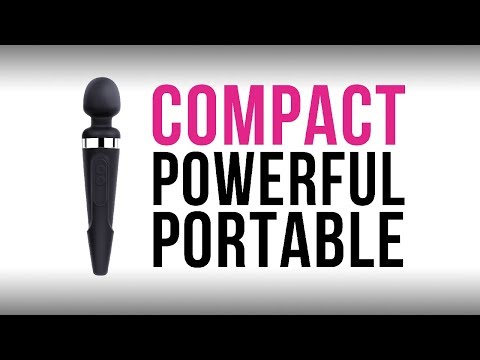 The first thing worth noticing from that demonstration is that the head of the device itself does not spin around, a dual motor rotating mechanism inside the head moves. I find this results in more authentic stimulation of my vagina compared to the sometimes angle-grinder feel of the toys that move the whole head such as the Hitachi magic wand.

The toy is compact, about the size of a microphone. All parts that come into contact with the body are made from body-safe silicone so there's no need to be worried about harmful chemicals entering the body.

Compared to some of Lovense's other toys, the Domi is merely water resistant as opposed to completely waterproof. So, when cleaning you should avoid submerging it in water or putting it under the tap at full power. So long as you take your time and be somewhat sparing with how much liquid you allow on it, you'll be okay.

How Does It Feel?

This little bugger gives off some overwhelmingly powerful vibrations, so be warned.

Each increase in vibration speed I could feel more specific sensations pulsing into my clitoris & labia, like a physical version of hearing more parts of a song when you turn the volume up. I never actually found out what 100% power was like because it has started to be too much for me, I'm absolutely blown away by the Domi. When pressed for time, I've whipped it out and brought myself to climax in under five minutes flat, sometimes less. It is definitely one of the more versatile toys in my arsenal.

It delivers powerful vibrations that at times almost make the toy hard to keep a handle on. I especially enjoy making use of the Lovense app to allow my husband Don to control the level of power while I focus on the specific movements required to get me off. In that way, he gets to be involved in my sexual release even if he's in a very remote location elsewhere in the country.

Where I Bought Mine

The best place to purchase the Domi is from Lovense themselves!

The only place I recommend you purchase any Lovense product including the Domi is directly from the official Lovense store.

Click the link below and you'll be taken to their official website, they're usually running a deal of some kind!

Lovense is a company that myself and my husband are huge fans of. Their toys are perfect for couples that have a need for long distance sex toys. All of their toys can be connected to the Lovense app for remote control by anyone who has an internet connected phone that you've given permissions to within the app.

We've created a complete guide to all the Lovense toys if you care to read it. It will explain more about their line of products and also give you more information about the Lovense company.

The Domi by Lovense is the pinnacle in wand style vibration technology. The sensations produced are powerful, highly customizable and downright addictive. I've dropped it a few times and functionality was not impacted whatsoever, so durability is a definitely an attribute of the Domi. The fact that it's a knock-out device on its own just means all of the added features such as the flashing light, ability to be synced to music, and full in-app control are icing on the cake.

I highly recommend learning the ropes of the remote app so you can fine tailor the wide range of stimulation into a pattern you can enjoy the most, it adds a lot to the Domi before you risk becoming bored of it. Seriously, give the app a shot if you want to get the most out of this toy!

I wrote a separate post about the best wand vibrators in which the Domi was ranked #1. Give it a read if you'd like to see the other wand vibrators that I don't regret buying.

If you have any questions at all, be sure to drop me a comment down below and I'll get back to you as quickly as possible. I try and reply to comments once daily.

Hello my name is Louie and my lady Sanja and we were wondering if it is recommend to us two Domi vibrators one by her clitoris and labia another domi by the lower labia and or anus were not talking about harming her or inserting the domi’s anywhere. About vibes and climax start slow shes unsure about using a hush but is open to the idea when we talked about it Sanja suggested that she wanted to try using two domi wand controllers for a different and new climax but we would do the safest and comfortable for her but yet would like to exerperiment with two lovense domi’s This would be more for her pleasure of course because we have had her domi on many occassions on 10 mins or longer on car ultra high setting in different many different patterns as well. I want you to know i take of lady and would only seek out advice before trying something thats so intaminte with between us. Thank u for u for your time dr.
Sincerely
L&S

Out of all possible wand massagers, what you’re shooting for is best accomplished with two Domis compared to two of just about any other wand massager. That’s because the part of the Domi that actually moves is underneath a silicone sheath that doesn’t, thus totally eliminating any “grindstone effect” that might be present with other toys. I see nowhere where your plan can go wrong, but maybe focusing on the interior of the vagina with an inserted toy and the domi focusing on the exterior might provide a more varied experience for your significant other. The toy I’d recommend for this task is the Lovense Lush, the official page of which can be checked out by following this link: https://doctorclimax.com/recommends/lovense-store/

Still, if that isn’t your style, there’s nothing wrong with your two Domi idea.